The Opinion Outpost Surveys at opinionoutpost.com and owned by Dynata LLC is a market research and survey-taking company.

It has recently become part of Survey Sampling International (SSI) in which you can make a little money giving your opinions on products and services by filling out surveys.

Joining Opinion Outpost Surveys is free and is available to residents of the United States or the U.K. if you’d like to become a panel member.

OpinionOutpost has a points-based reward system in which you can get money put into your Paypal account when you reach their minimum payout amount.

Note: Opinion Outpost Surveys no longer does payouts by check.

Many review companies claim they have moved on to different payment methods after fraudulent companies began sending out checks purported to be from OpinionOutpost Surveys.

Some of these fraudulent companies also contended Opinion Outpost was paying people to be secret shoppers, which is not true.

Again, this is not a reflection on OpinionOutpost, as they themselves are a legitimate company.

By taking Opinion Outpost surveys you accumulate points, and the basic point structure is 10 “points” for one dollar in the United States.

You get more points for doing more surveys (and longer ones), and you must accumulate 50 points ($5) to get paid.

It is said that Opinion Outpost surveys pay between 10-100 points each, but most are in the lower range. 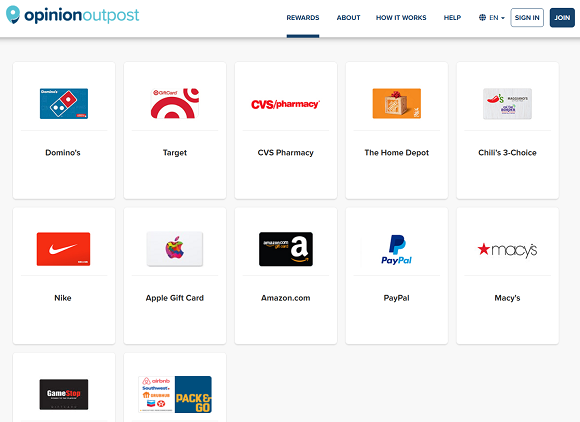 When you join OpinionOutpostSurveys, you will be asked to fill out numerous “profile surveys” which are not rewarded with points.

But if you want to make money with them you should fill all of these out as you will have more opportunities to complete surveys that do pay if your profile is complete and up to date.

Another very important thing to know is that you must remain active with Opinion Outpost in order to receive points and therefore get paid.

If you don’t at least attempt to qualify for a survey in a 3-month time frame, your account can and will likely be terminated.

Including any points, you have built up to that point.

The number of survey opportunities varies, as in any survey company.

But it appears you could expect 2-10 survey opportunities a month from OpinionOutpost.

Again, that number could change – especially now that Opinion Outpost Surveys is under the SSI umbrella.

But that’s a fairly common base number in the legitimate marketing research industry.

There are also quarterly sweepstakes of differing amounts given away by Survey Sampling International.

And your entry will be combined with entries from other panelists under the SSI umbrella in the U.S., U.K., Canada, and the Netherlands.

Your entry competes with other entries from residents of your country.

Some of those combined sweepstakes entries come from other SSI survey companies.

The quarterly sweepstakes from OpinionOutpost plus other SSI-related companies in the U.S. pays out $12,000.

In Canada, the sweepstakes amount is $1,500 in Canadian dollars.

It’s different for each country, but each drawing is held four times a year.

From my research, it appears there are many people who consider OpinionOutpost Surveys to be one of the better survey companies, and many who are disappointed.

However, this is not out of the ordinary, necessarily.

But a factor in the wide variety of opinions from people who have joined could be in part due to the fact things have changed since they joined Survey Sampling International.

Also, many people are predisposed to be upset with being a panelist in a marketing research company when it turns out they don’t become wealthy from taking part in this business.

And you might have heard this before, but I’ll say it again:

You’ll NOT become wealthy by filling out surveys for any company!

On par with most market research companies.

Or ANY other get paid to complete surveys company.

I do not recommend that you waste your time with paid surveys, in this case with OpinionOutpost Surveys.

Thanks for reading our Opinion Outpost review.

Back To Business Reviews

Enjoy the site, Read the Reviews.

And if you can’t find a review on a “make money online” business opportunity that you’re thinking about pursuing, you can submit it right here: